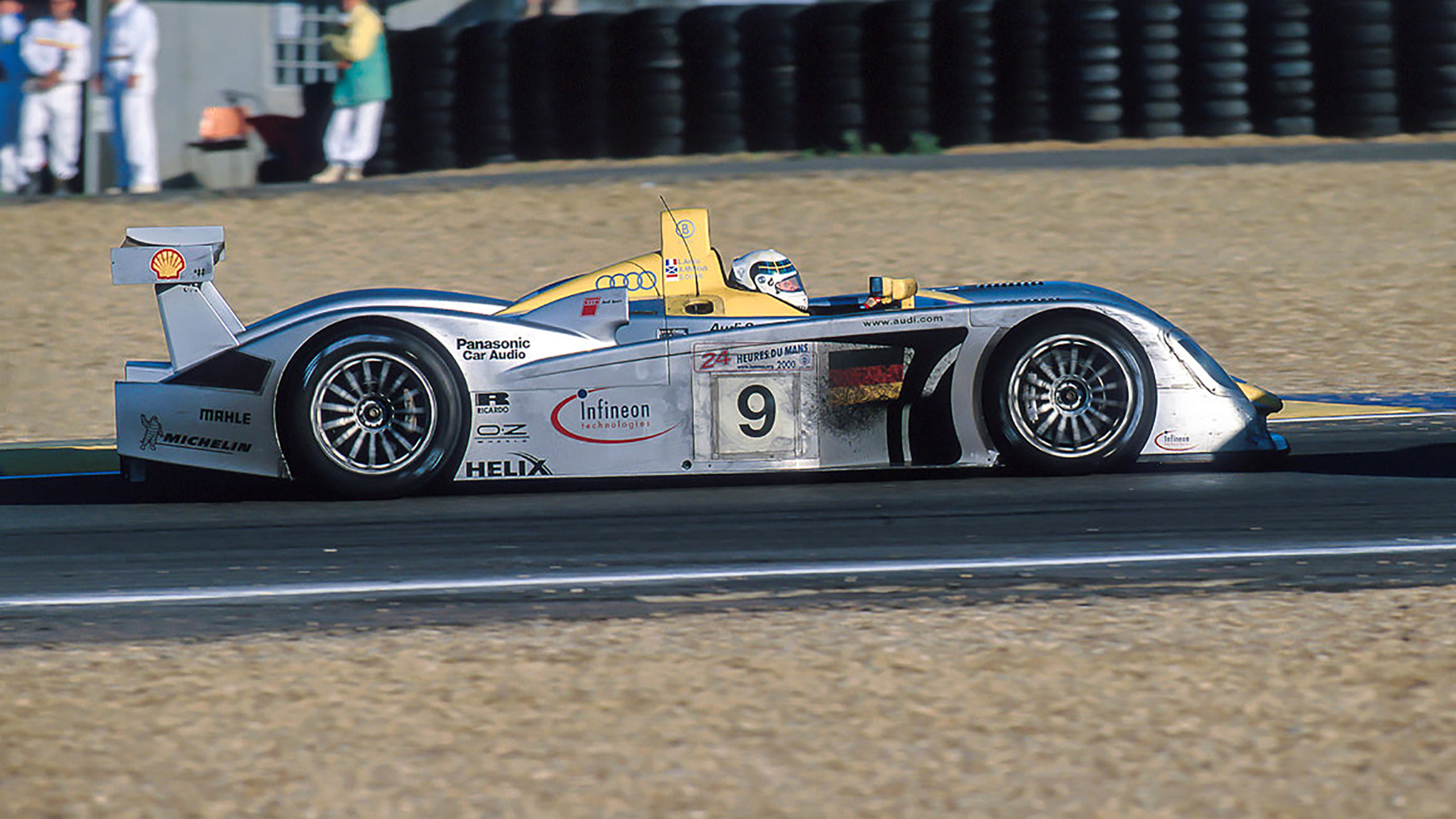 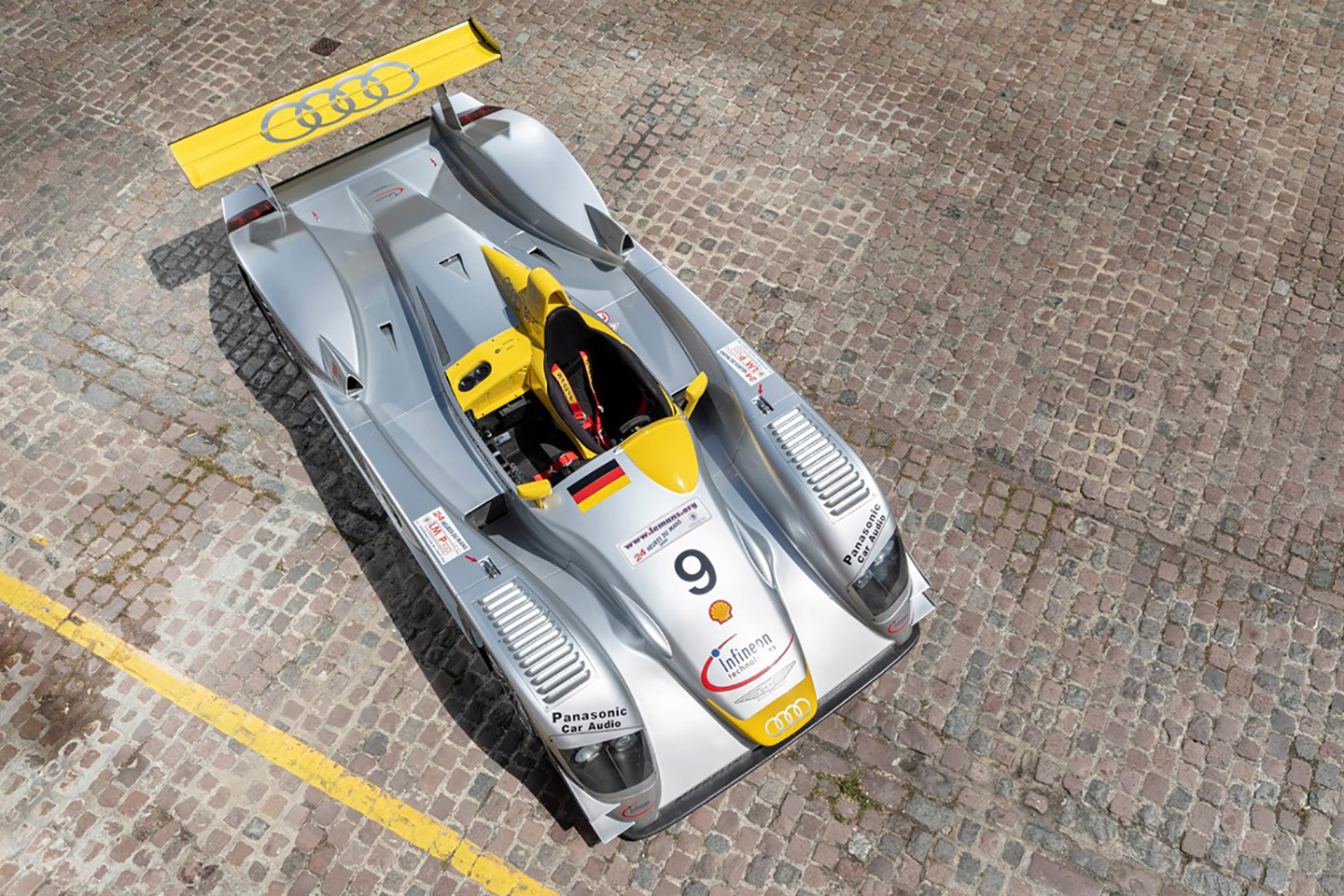 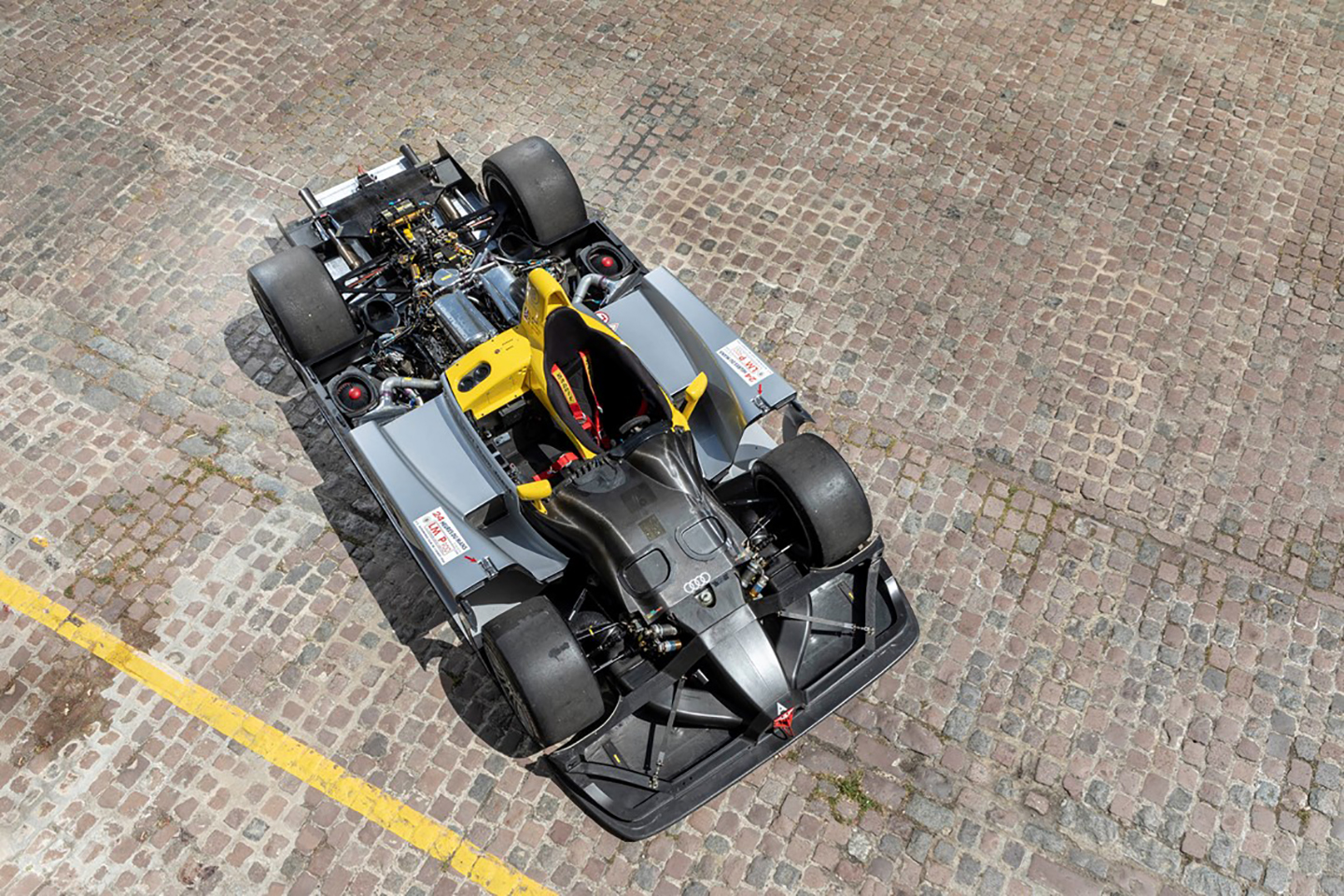 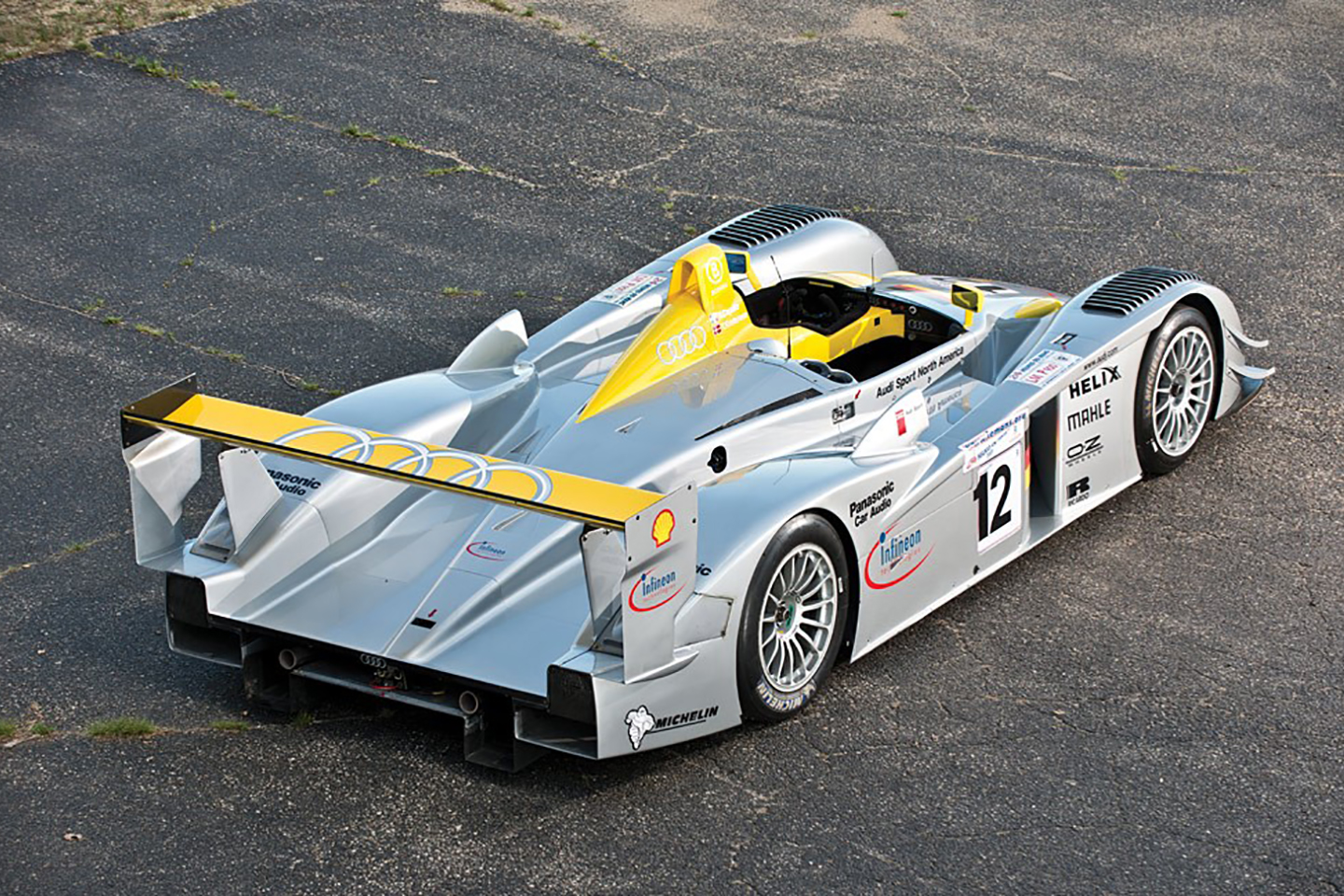 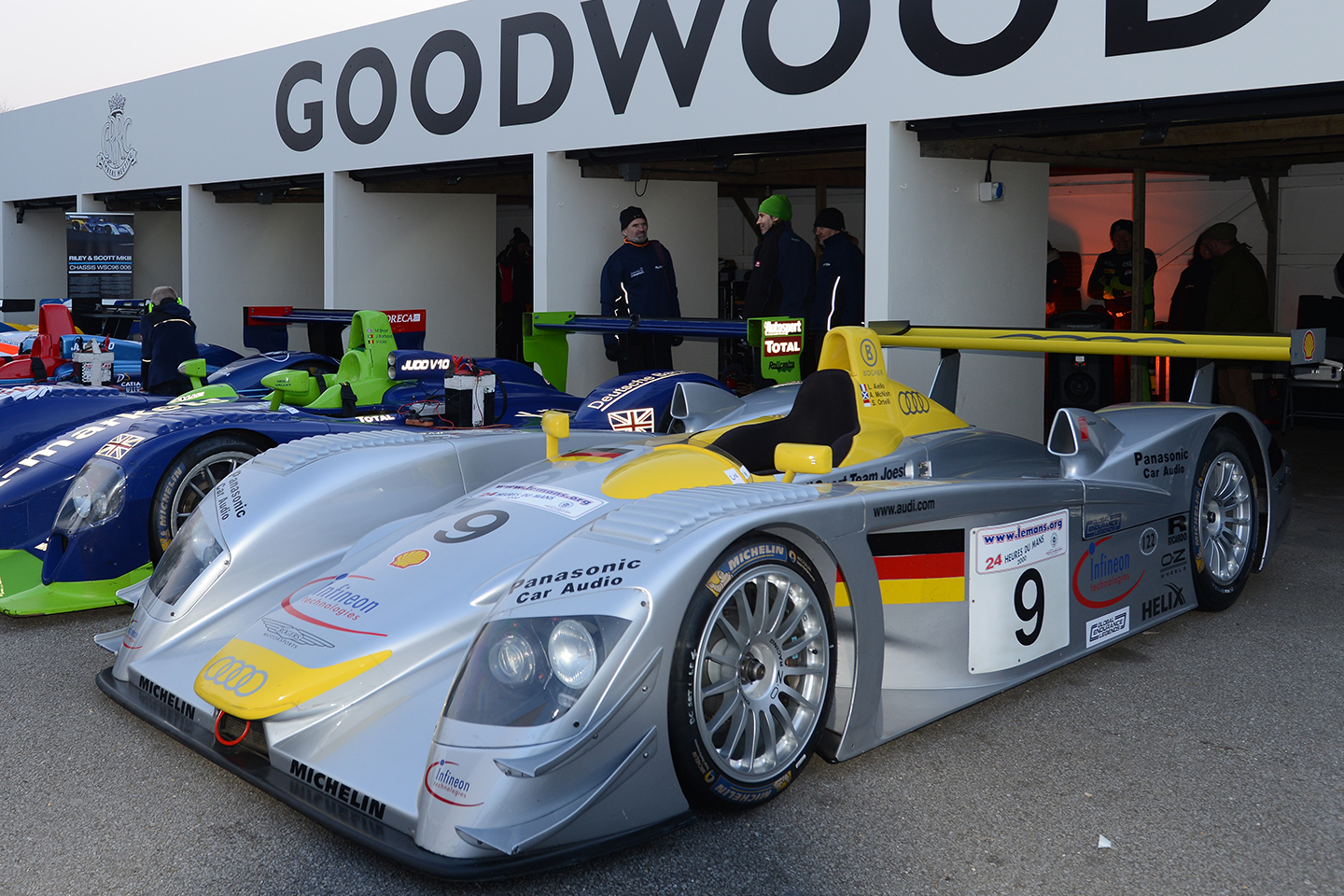 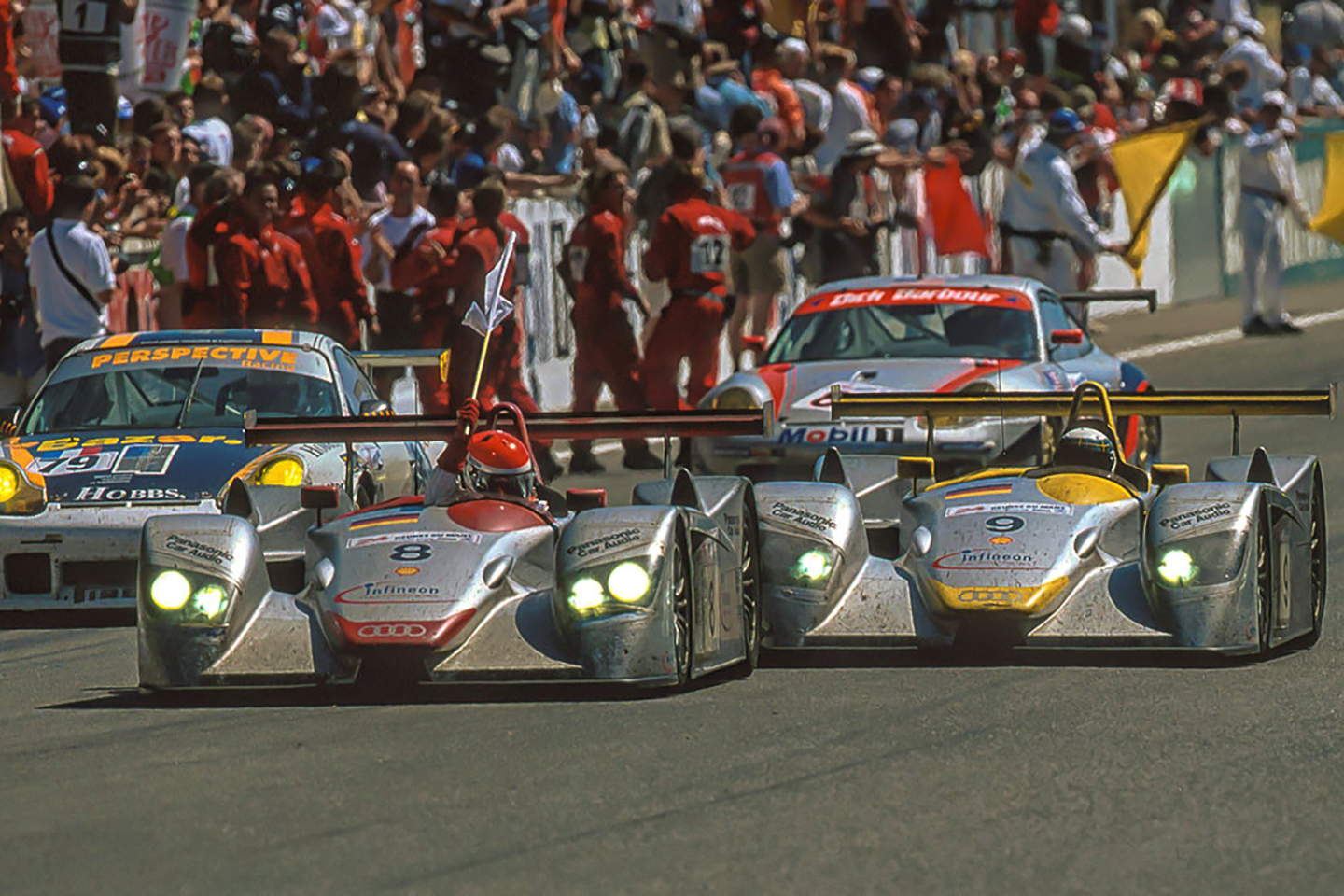 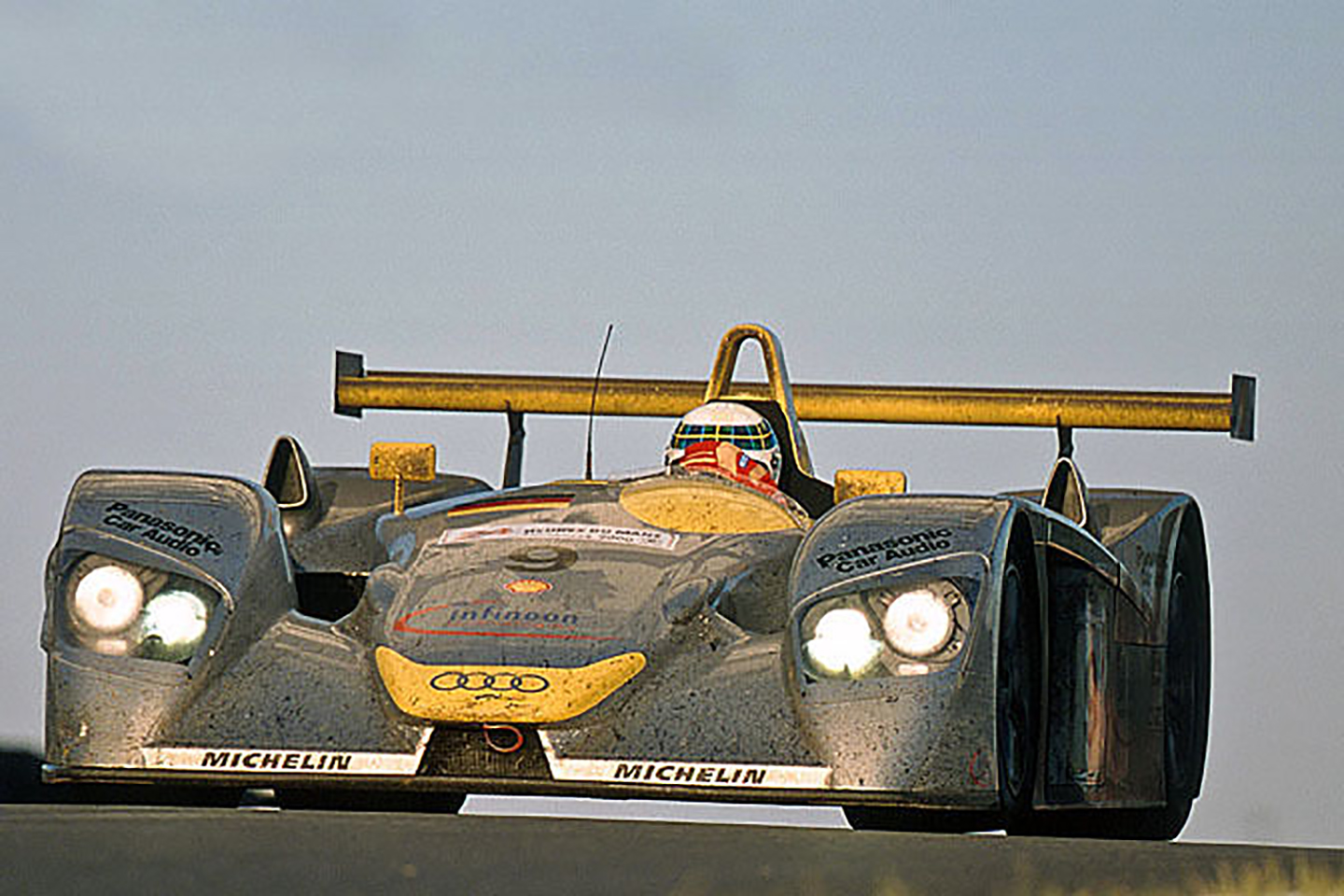 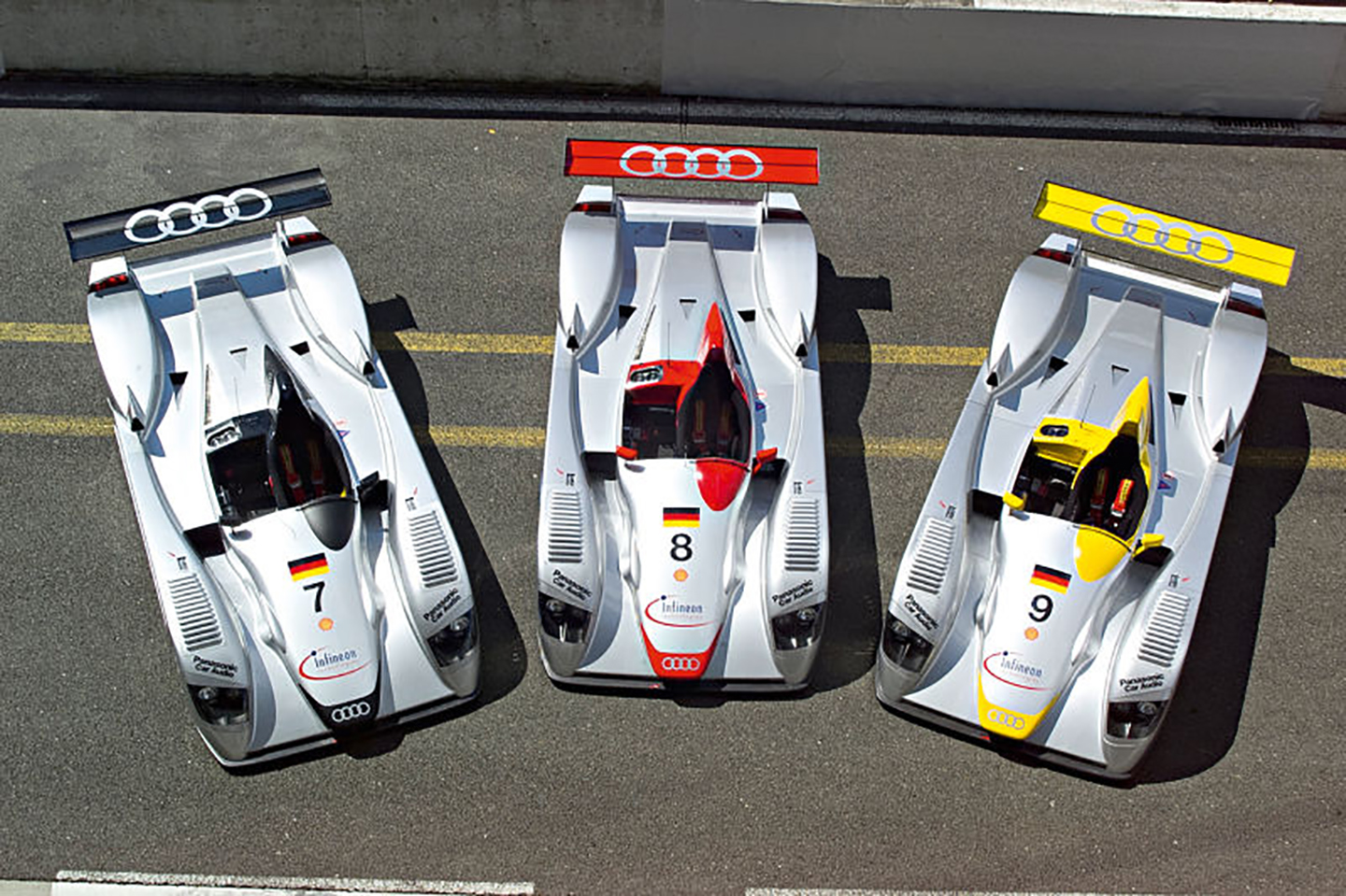 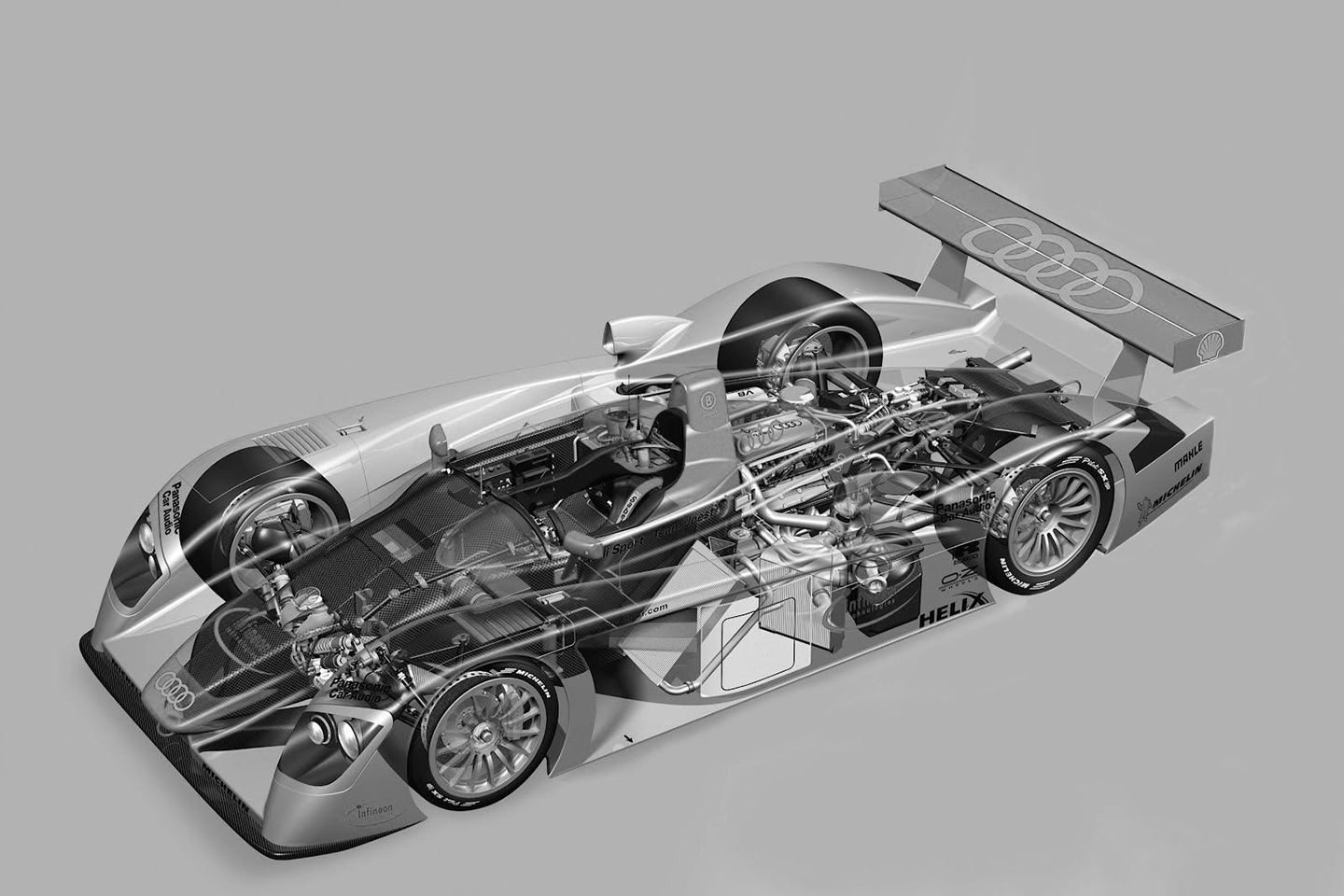 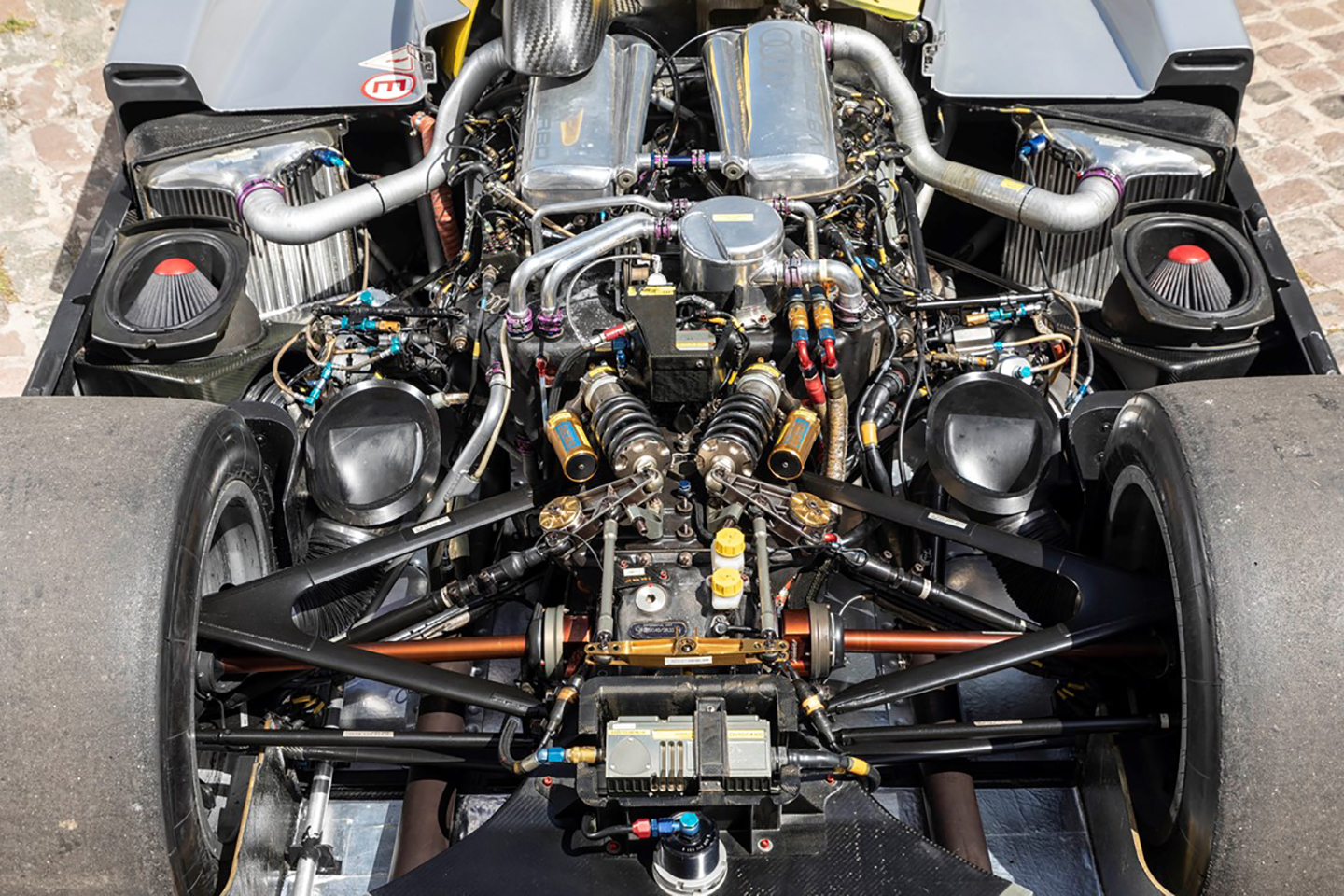 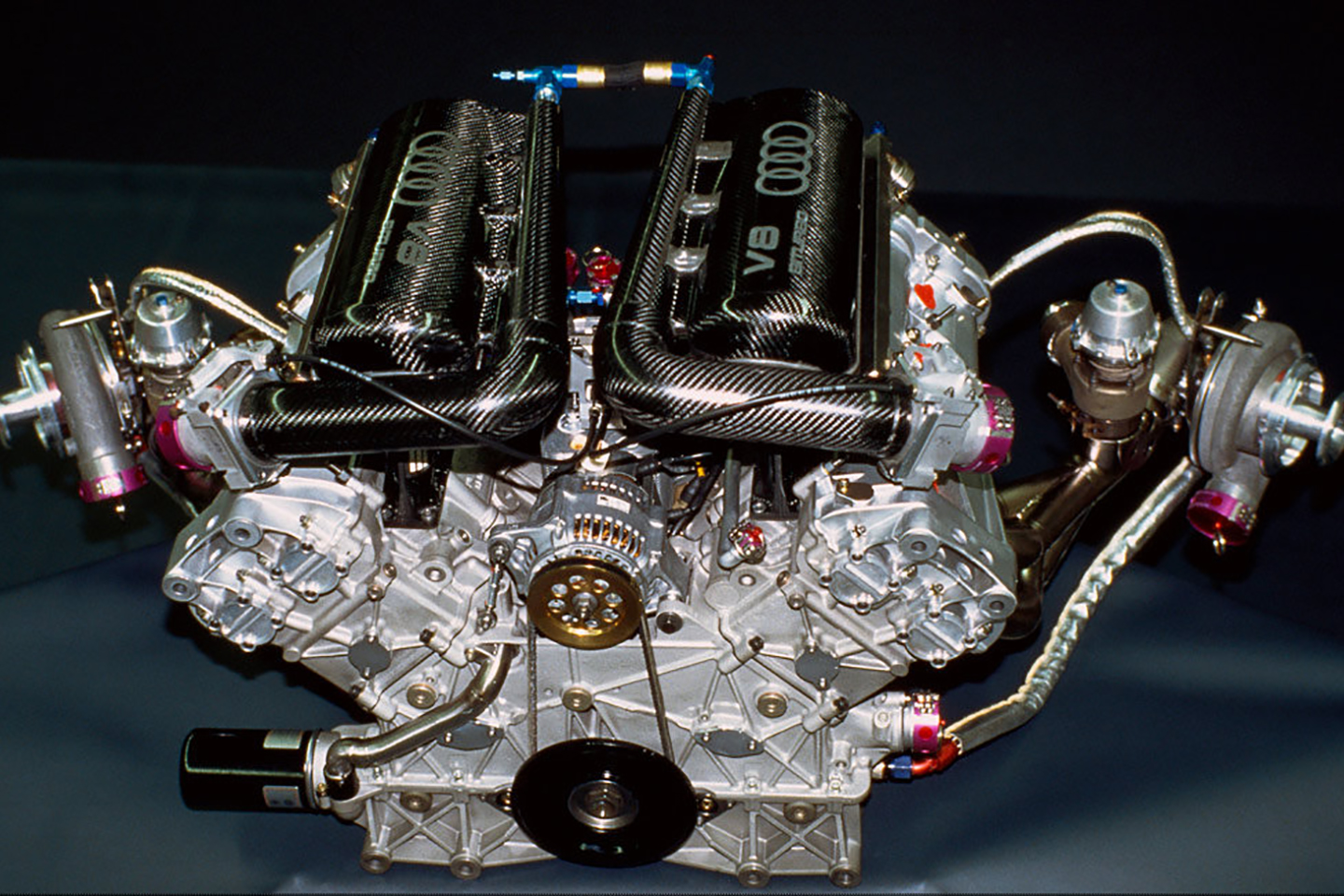 This Audi was one of the three works team cars run at the 2000 Le Mans by 24 Hours by Audi Sport  Team Joest, they were the class of the field qualifying and finishing in the 1st three positions. This car, chassis R8 #405 running as number 9 with yellow identification markers and driven by McNish/Aiello/Ortelli qualified on Pole and finished 2nd, one lap behind #8 after replacing it’s gearbox in under 4 minutes during the race, footage of the gearbox change is still available on YouTube: https://youtu.be/sKjVQbYcTiY

The Audi R8 is a Le Mans Prototype 900 (LMP900) and was a designed with data gleaned from the running of the Audi R8R and R8C experimental cars that were both raced in 1999. The two different designs were utilised to determine whether an open or closed cockpit LMP900 would be more competitive, there were different but supposedly equal rules applied to each form. The open car proved to be the better of the two for both European and American specifications and under  the guidance of Audi Sport boss Dr Wolfgang Ullrich, a new car was designed for 2000.

Audi, however, did not return with a development of the R8R but instead incorporated all the lessons learned from both of the previous year’s cars in the brand new R8. Once again, the car was designed in-house by Wolfgang Appel and Michael Pfadenhauer. Like most contemporary sports prototypes, it was built around a carbon-fibre composite monocoque with double wishbones and push-rod actuated springs and dampers on all four corners. As with the R8R and R8C, the major chassis components were constructed for Audi by specialists Dallara.

What was carried over from the R8R and R8C was the powerful but frugal twin-turbo V8, designed in-house by Ulrich Baretzky. Constructed from lightweight aluminium-alloy, the compact engine displaced just under 3.6 litres and was equipped with a pair of Garrett turbochargers. Once fitted with the mandatory restrictors, the V8 initially produced around 600 bhp. The engine was mated to a Ricardo-sourced six-speed sequential gearbox, which was operated by steering wheel mounted paddles.

Not only did Audi Sport design the quickest LMP900 but from its earliest conception the speed with which it could be stripped and rebuilt was one of the chief concerns for the designers as the car would be racing for anything up to 24 hours non-stop. For maybe the first time, the complete car was designed and built in modular form for ease of repairs, famously easy to switch damaged components in and out of the chassis during a race. Quick-connect hoses featured prominently throughout the car and whole built up sections of components could be removed and replaced as single units, this included the whole gear-box/rear suspension unit.

As with the R8R, Audi contracted the experienced Reinhold Joest, whose team had already won 4 overall victories at the Le Mans 24 Hours, to develop and run the 3 works cars as Audi Sport Team Joest.

Debut race for the new car was in the USA at the Sebring 12 Hours 2000, 2 cars were entered and they qualified 1st & 2nd and then finished 1st & 2nd a phenomenal result as the circuit has a justified reputation as a car breaker.

Next came the jewel in the crown, the Le Mans 24Hours.

Allan McNish put the #9, chassis 405, on pole just ahead of the other 2 Audis and it then led the race until a gearbox problem dropped it behind the sister #8 car. A new gearbox was needed but Audi’s foresight with the modular construction meant the operation took less than 4 minutes and the car barely dropped a lap.

After Le Mans the Audi R8s were handed over to the other Audi works team, Audi Sport North America who took #405 to the Nurburgring where Biella ad Pirro finished 3rd before shipping to the USA to run in the American Le Mans Series where chassis 405, now using race number 78, would gain 2 victories, Texas Speedway & Las Vegas and finish on the podium at all but 2 races.

For 2001 the works cars were handed over to selected private teams, #405 to Champion Racing and driven regularly by; Johnny Herbert, Andy Wallace & Dorsey Schroeder continued to rack up the podium finishes.

During the same 6 years they would win the American Le Mans Series 6 times.

The winning streak was only halted when Audi produced a new race car the Audi R10 which became the first diesel powered car to win the Le Mans 24Hours.